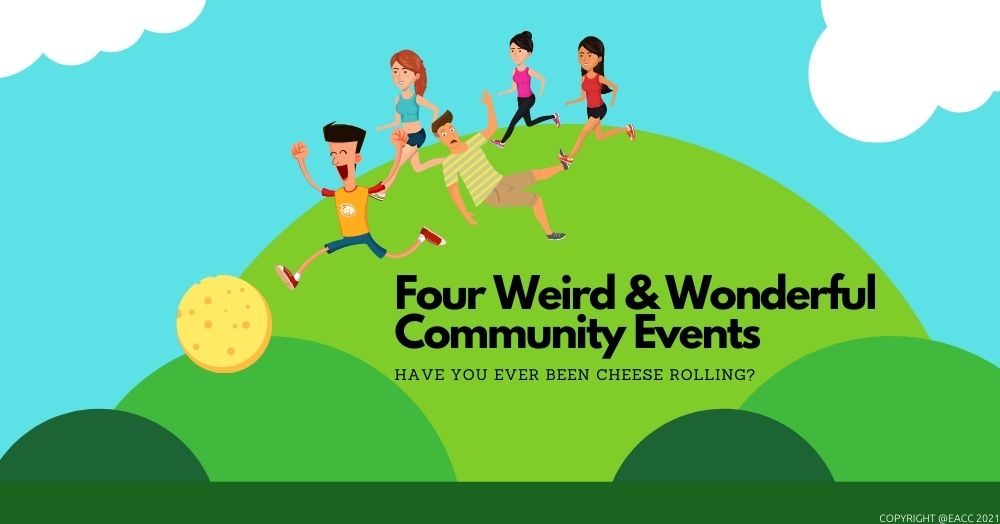 In this three-minute read, we celebrate the eccentric events that unite and delight.

Whether it’s bog swimmers in mankinis or Vikings brandishing burning fence posts, Britain can lay claim to some of the world’s weirdest and most wonderful events.

And while each is unique, they all have one thing in common: they’re rooted in the community.

Unfortunately, due to Covid-19, many of these headline-grabbing annual fixtures won’t take place this year. Ditto for many of the low-key fetes, fun runs and fairs that are typically held in villages and towns in the summer months.

But we can still show our support. The organisers of many of these events are holding online fundraisers, so don’t let Zoom fatigue stop you from taking part virtually.

And, when large group activities can return, let’s all make the most of them.

Here are four of the weirdest UK events.

For centuries, people have hurtled down precipitous Cooper’s Hill in pursuit of a round of Double Gloucester, resulting in a few broken bones and many bruised egos.

No one’s quite sure why cheese rolling became a ‘thing’, but some think it was a pagan ritual to encourage fertility.

This event traditionally takes place on the second Bank Holiday in May, but alas not this year.

Ever wondered what it’s like to swim in murky water that tastes like washed potatoes? If the answer is yes, then add the World Bog Snorkelling Championships to your bucket list.

This event, dreamt up in a pub (after quite a few pints no doubt), started in 1986. It usually takes place on the last weekend of August (the next championships will be in 2022).

Participants, often in fancy dress – mankinis and superhero costumes are perennial favourites – swim in a 60-foot trench to raise money for charity.

Setting fire to barrels and rolling them through the streets was a common lark in the West Country during the 1600s.

Then, someone in Ottery St Mary decided rolling 30kg barrels of burning tar was for wimps and started carrying them instead. Hence the Burning Barrels of Ottery St Mary on 5 November became a lasting tradition.

The Up Helly Aa fire festival takes place on the last Tuesday of January. Many in the local community spend months making elaborate costumes and a wooden Viking longship for the event.

On the big day, up to 1,000 warriors or ‘guizers’ march in a torch-light procession that culminates in the Viking galley being set ablaze.

From all of us here at Rochills, have a great Bank Holiday.